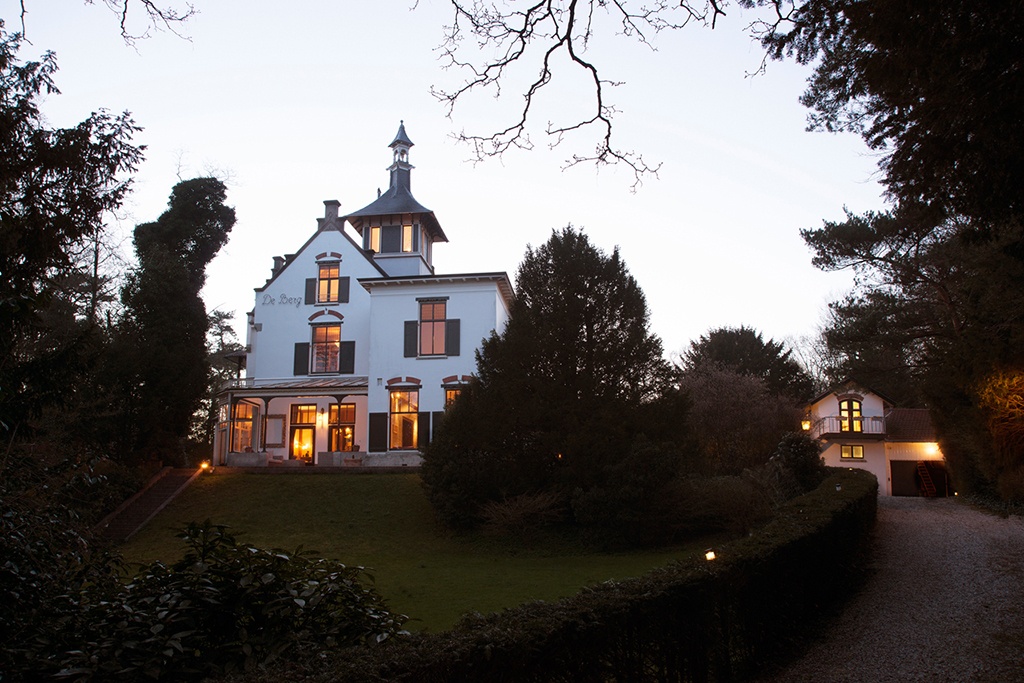 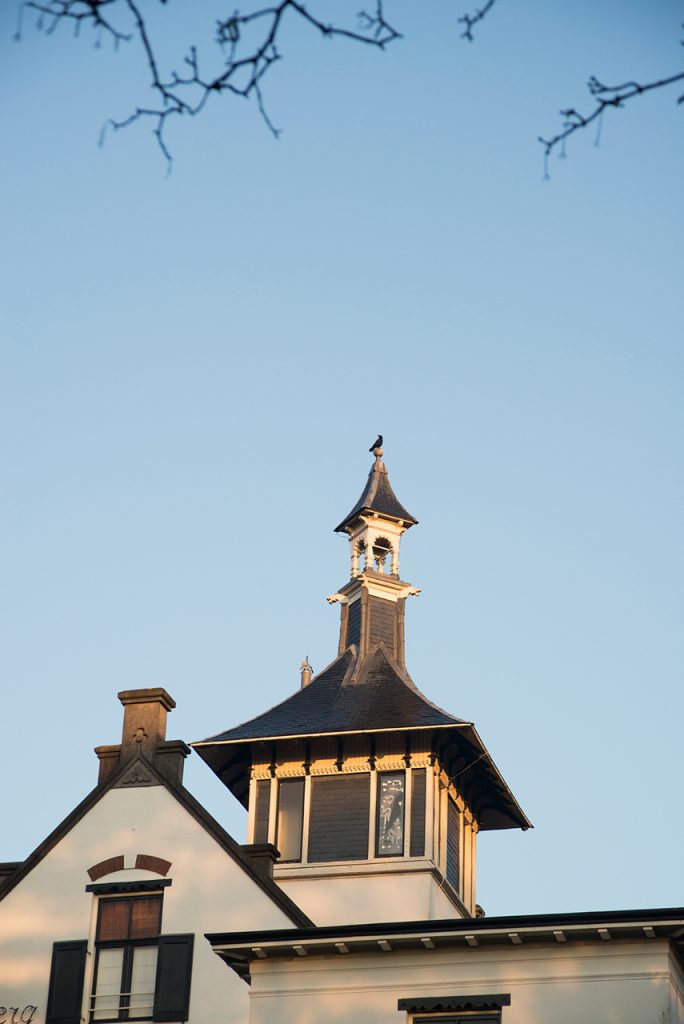 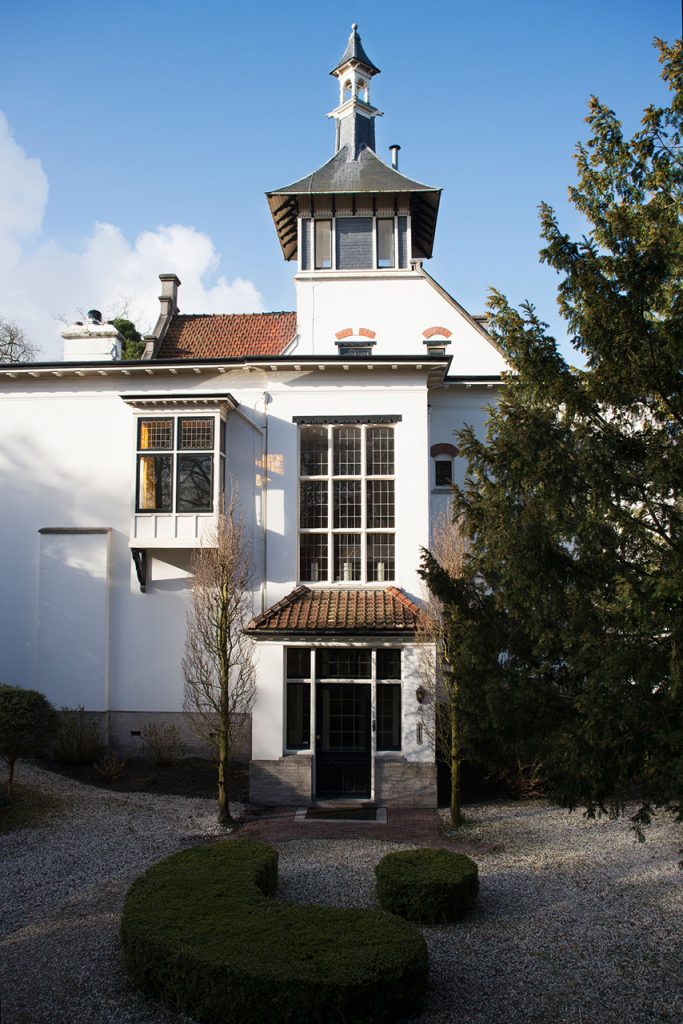 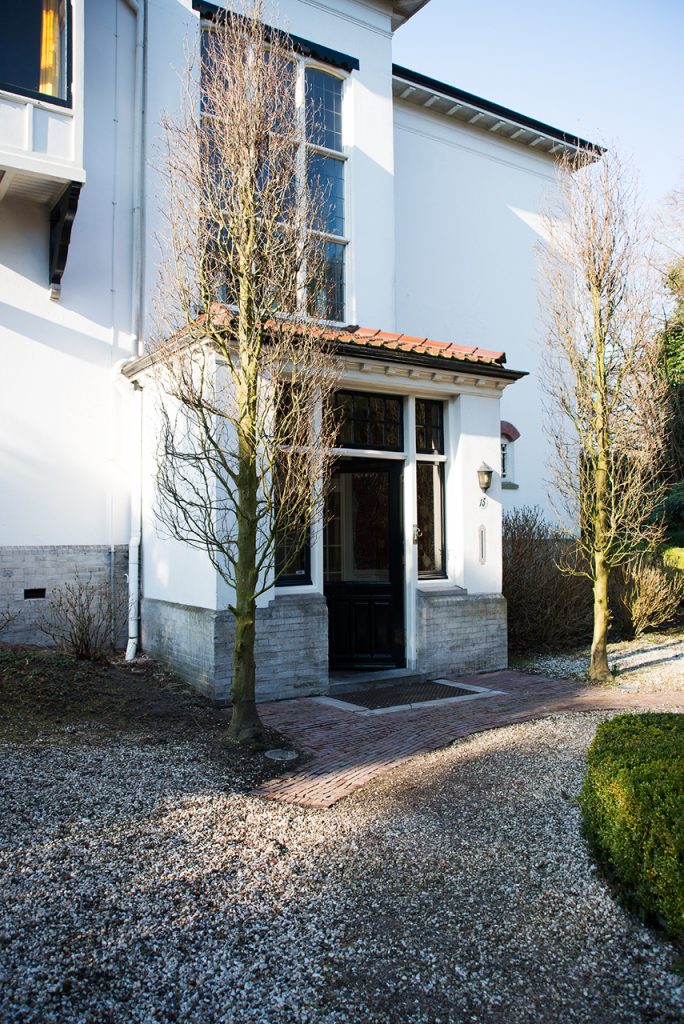 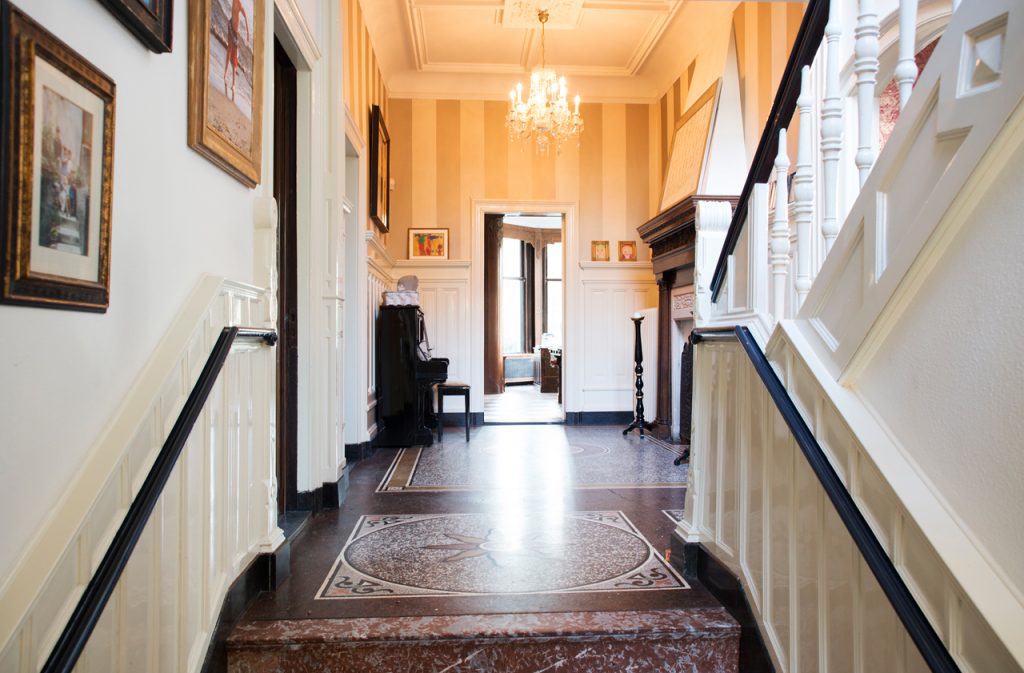 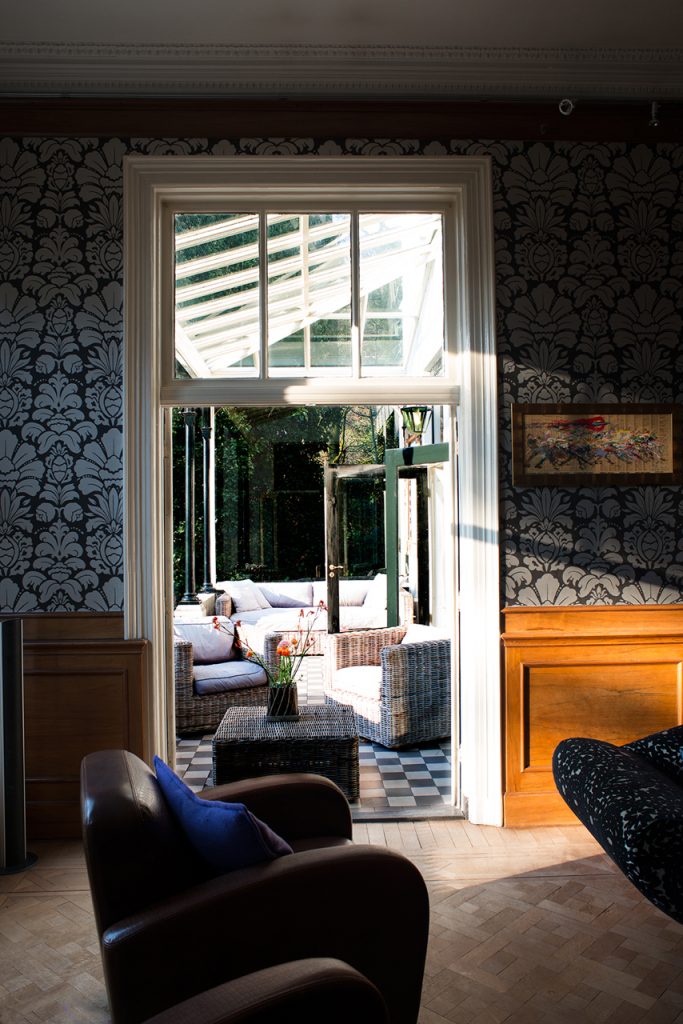 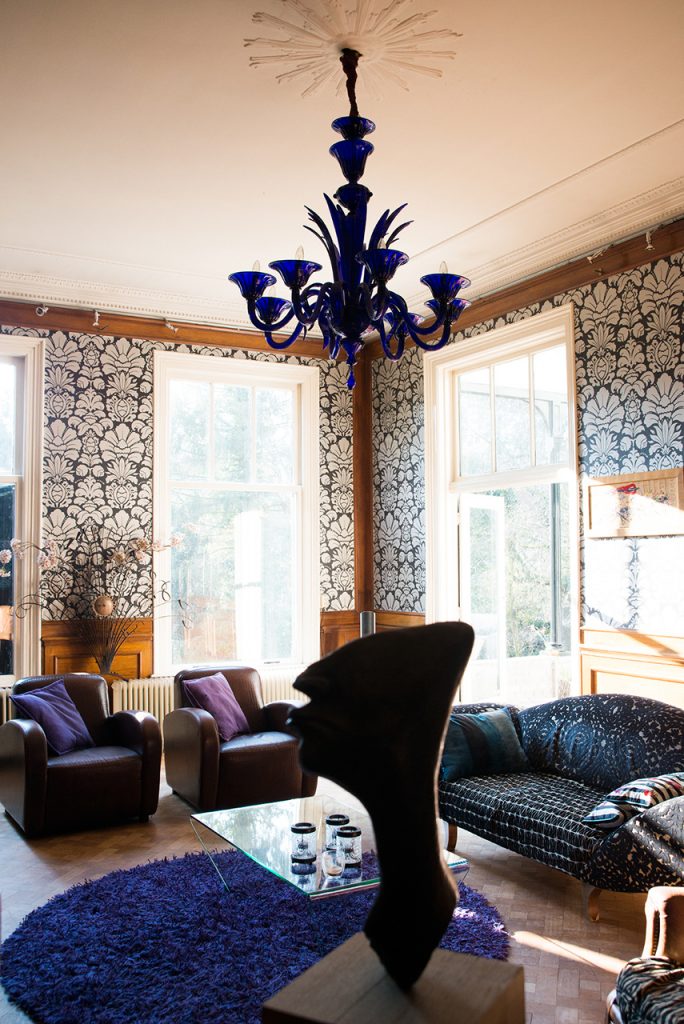 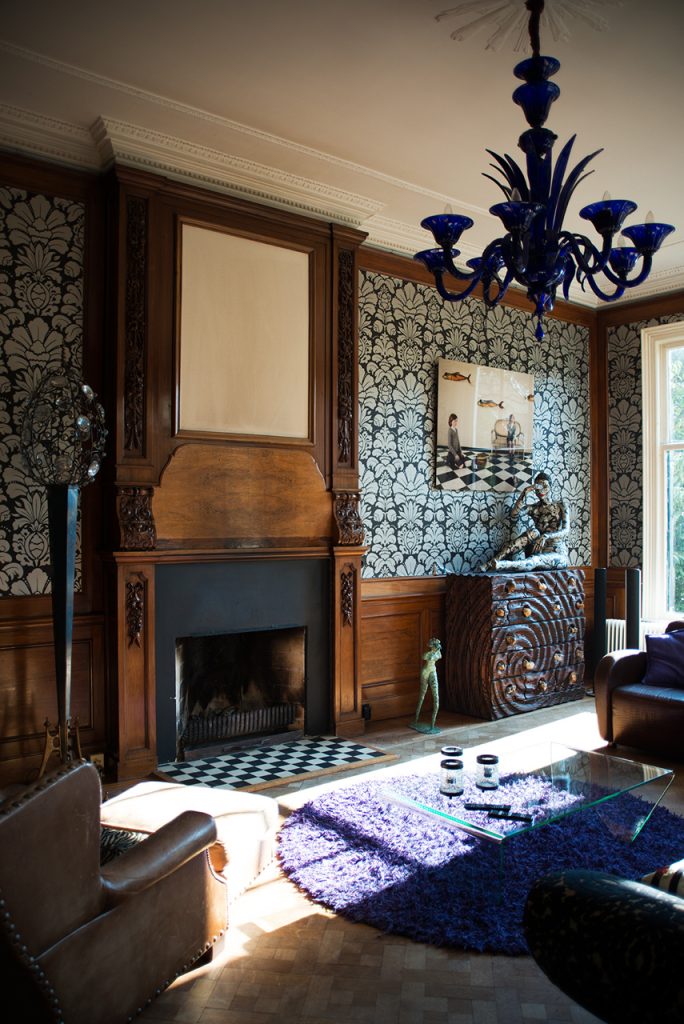 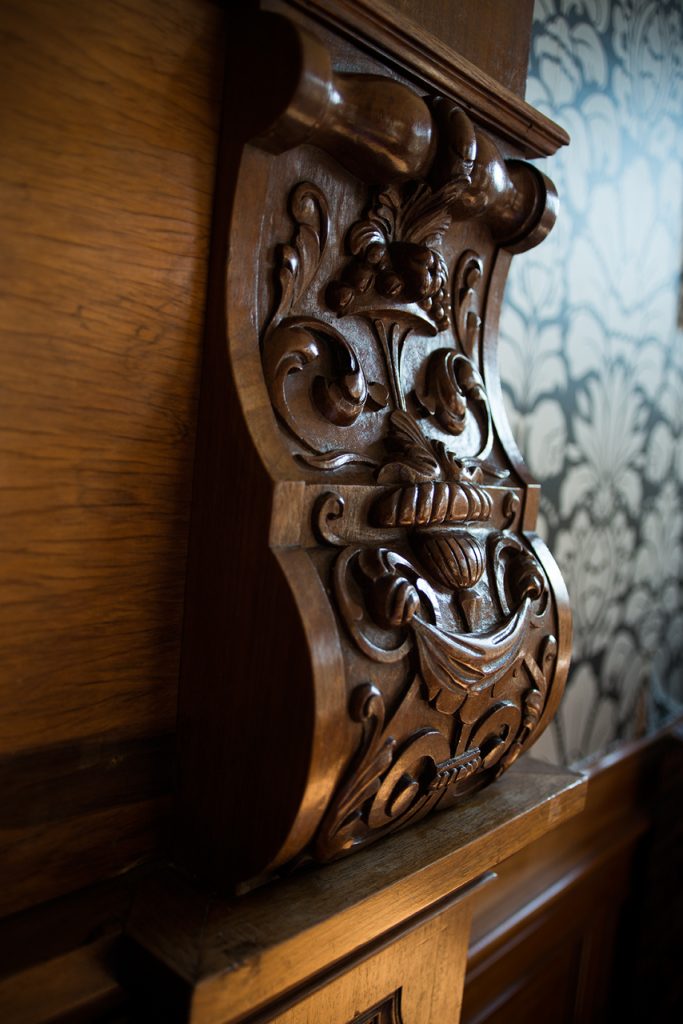 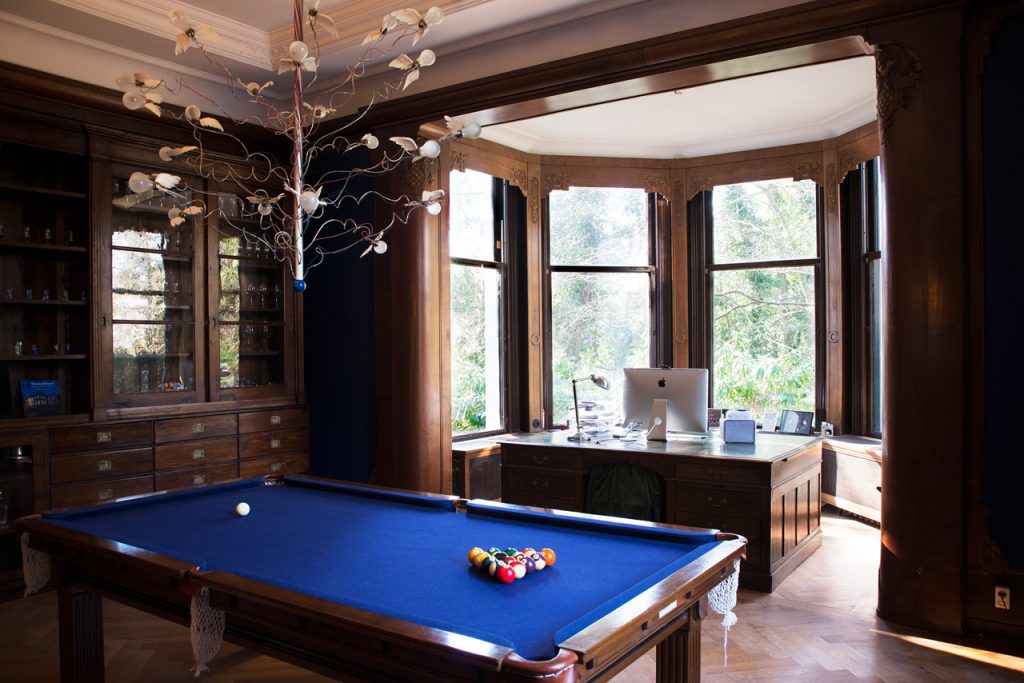 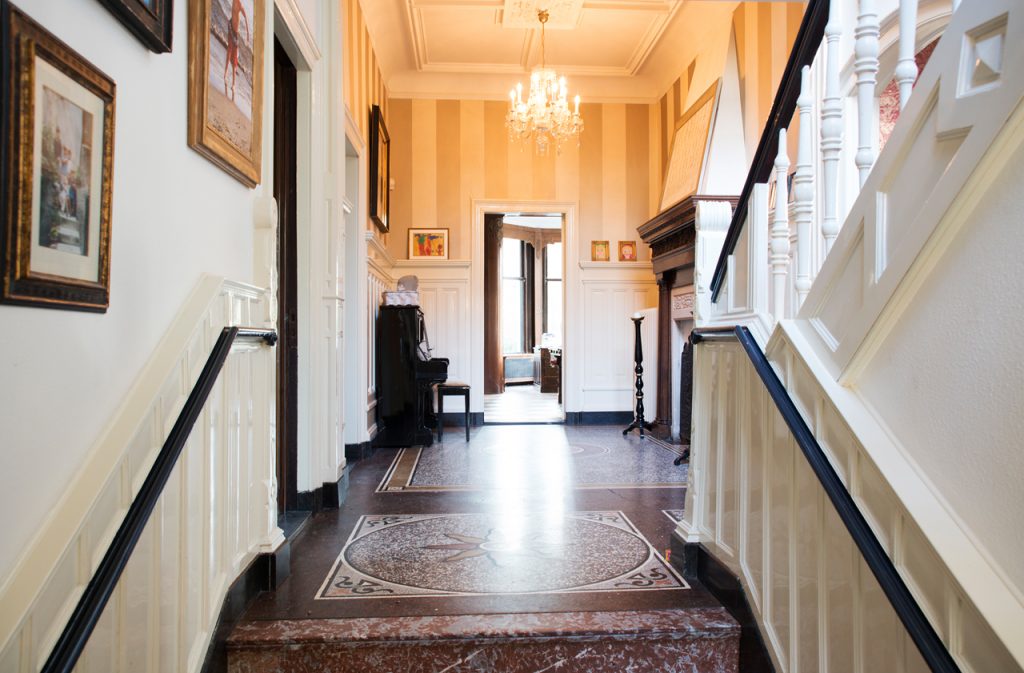 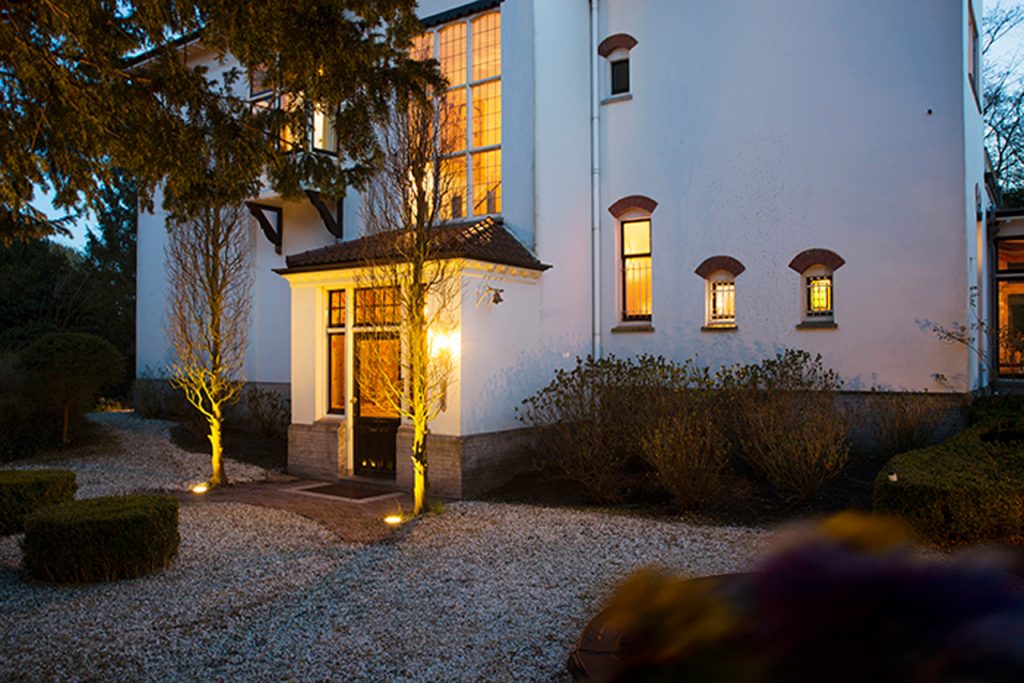 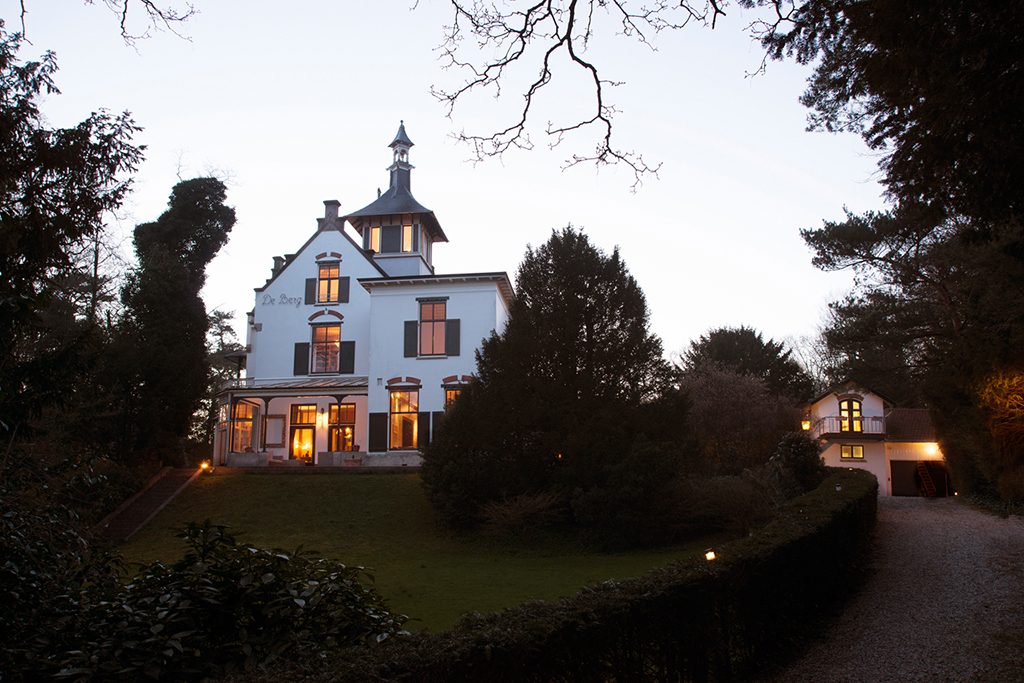 Villa De Berg is one of the oldest villas in Bloemendaal. The property is part of a group of villas built between 1897 and 1905 in Het Bloemendaalsche Park, formerly the Buiten Rijp estate. This park was developed according to plans by the Haarlem architect L.J. Ritter and is the first villa park in the Netherlands to be built outside the city. In this part to the west of Bloemendaalseweg, where the gentlemen and ladies lived “at the height”, the leafy and exclusive character of Bloemendaal, which then quickly developed into a commuter town, has been well preserved. In 1999, the Bloemendaalsche Park area was designated by the government as a protected village area, together with the adjacent Duin en Daal.

Villa De Berg was designed by the well-known architect Jacob van den Ban (1860-1943). It was designed by order of Mr. M.J.L. Schram, partner in the Exploitatiemaatschappij “Het Bloemendaalsche Park NV”. Van den Ban’s impressive oeuvre comprises dozens of houses, station buildings, factories, office buildings and retail properties, particularly in the Haarlem and Kennemerland area. A number of buildings designed by Van den Ban have been appointed national monuments, including Villa De Berg and the well-known Drostefabriek. For the design of Villa De Berg he collaborated with architect Simon Roog, with whom he was associated between 1891-1899.

Typical of the villas on the Rijperweg are their spectacular location on steep dune tops, the winding roads on which they are situated and the painterly eclectic style in which they are built, in combination with a high vertical silhouette. The villas often had a coach house with a stable. The coach house of Villa De Berg was designed in architectural coherence with the house.

In 1910, the Bloemendaal architect S.P. Rijnierse made a number of changes. The entrance, utility room and living room were enlarged by him. The expansion added a new layer to the existing mix of architectural styles. In addition to a continuation of the neoclassical style features (such as the round arches, roof moldings and balustrades), the new parts also show contemporary influences. This can be seen in the decorative beams (lintels) above doors and windows, which are inspired by the work of the well-known architect Hendrik Petrus Berlage.

As was customary with this villa type, the building was built according to the English example on an irregular floor plan in which the spacious rooms are grouped around a large and high hall. The living areas are south-facing; entrance and service rooms on the north. The fireplaces in the hall, the sitting and dining room are robust and beautifully designed using fine wood carvings.

The house, built in ‘transition style’, shows a combination of different architectural styles, such as Dutch Renaissance, neo-classicism mixed with English country house style, Jugendstil and Art Deco. The mix of influences is typical of the fin-de-siècle, a period in which new architectural styles emerged while others were in danger of disappearing. The neo-classicism is clearly visible in the load-bearing parts of the building, such as the segment arches and consoles, and within the baluster-shaped pillars of the staircase. The decorative woodwork, the design of the bay windows and the original stained glass motifs are inspired by the 17th century Dutch Renaissance. The many rich details that adorn the building are almost all intact.

The grandeur of the way of life of the first generation of residents is still clearly visible in the spacious and high rooms with lots of wood, the beautifully detailed fireplaces and stained glass windows. The frames of doors and windows, stucco ceilings and the very fine door fittings also testify to the way in which the first occupants spared no expense or effort in decorating the interior. The paneling dates from the early twentieth century, when the building was enlarged from the inside and authentic elements such as the woodwork, floors and frames have been preserved as much as possible. Two of the four mantelpieces date from the end of the nineteenth century.

In the design of the building, the natural location has been used as much as possible by locating the living areas on the dune. Originally the dining room and the office-come-playroom for the children were located here. Family life took place on this side of the building. In 1910 the office was enlarged and used as a sitting room. The fireplace is made of walnut, as are the ensuite doors to the dining room. The paneling is made of Rio rosewood.

Due to their south-west orientation, the dining and sitting room receive sun most of the day. Both rooms are adjacent to the terrace, so that inside and outside merge smoothly. This idea was built on during the renovation in 1910 by expanding the north and east sides of the building with terraces and verandas that border directly on the forest. This created a direct relationship between architecture and nature on all sides.

Particular attention has been paid to the exterior, which can be seen in the Victorian-style silhouette of the tower, the wide overhangs of the roofs and the decorated lintels. Neo-Gothic elements have been incorporated into the roof moldings. The roof tiles have an Jugendstil motif.

The impressive appearance of the house is partly due to the abundance of special details and richly decorated works of art. Special are the mosaic floors, which are still completely in their original condition.

The salon or gentlemen’s room is situated on the northwest side and is in the extension of the entrance. This space is the most representative room in the house, intended for the reception of guests. Here men’s affairs were discussed and cigars were smoked. The representative function can be seen in the symmetrical design of the room and the rich appearance of wooden frames and businesslike stucco ceilings. In the robustly designed wood carvings, the eclectic formal language of the villa as a whole is continued. The decorations show a mixture of classic shapes, Art Deco and Jugendstil. Walnut wood is mainly used for the woodwork. The woodwork around the mantelpiece is made of (African) Sapelie mahogany.

Despite the rich settlement history, the woodwork throughout is in its original state and well preserved.

The kitchen was renovated in 2003 and expanded with a conservatory. The space opens onto one of the terraces. The original 20th century paneling is still present.

The watchtower or belvédère offers a phenomenal view of the characteristic forest and dune landscape. The city of Haarlem can be seen to the east. The tower has a gently sloping tent roof with overhang on consoles, inspired by Italian villa construction. The roof is crowned by a lantern placed at right angles to it.

Just like the house, the former stable and coach house were also built in a transitional style. Elements of the chalet style have also been incorporated. The individual parts of the building (coach house, stable and hayloft) are still clearly recognisable. When the coach house was taken into use as a garage, the double doors were enlarged.

In the mid-1990s a heated swimming pool was built at the Koetshuis with a semicircular canopy that can be opened in three parts. The swimming pool is equipped with a counter current generator.

Kitchen has been expanded and renovated in 2004

Second floor has been completely modernized in 2004 Oil tank cleaned.

Foundation on steel. Acceptance in consultation.